Hey hookers, I’m Dixie Longate, America’s favorite Tupperware lady. I’m from Mobile, Alabama, but I moved my trailer with my kids to L.A. as conditions of my parole. I started selling the fantastic Plastic crap in 2001 and I have never had so much fun drinking for free in my life! Within a year, I was one of the top sellers in the nation because, well, me and some plastic bowls, and a bunch of drunks equals lots of sales. In 2007 I had a big opening of my show, Dixie’s Tupperware Party off-Broadway and got a Drama Desk Award nomination for Outstanding Solo Performance! I know, shut up, right?! NBC’s Today Show says it’s “Not your grandmother’s Tupperware Party,” and now over 7 1/2 years and 1,000 performances later, I’ve shown off my bowls in 5 countries. I’m so excited to bring creative food storage solutions to you this August to Big Bear ROMP!

Mateo Segade is a nationally touring DJ known for his playful and sweeping energetic sets. A resident DJ for Bearracuda, he’s also spun in Nola, Dallas, Philly, SF and Houston, in addition to regular rotations in LA, Long Beach and San Diego. Despite what he describes as his “unfortunate physical appearance” and an exceedingly reclusive nature, Mateo has been wholeheartedly embraced by the bear community, with gigs at Bear Night/SD, Bear Bust/Precinct DTLA, Sunday Bust/Faultline, DTLA’s inaugural PROUD Festival, and headliner DJ for the Gear Night party at 2017’s IBC.

Mixing the latest music with dance classics, DJ Brian Novy gets off on keeping his fans asking for more.  Novy landed his first gigs in Manhattan and Fire Island where he played for years before moving to Los Angeles. Novy spins regularly at various bars in LA and at the following parties: Fox Hole, Meat Rack, Crisco Disco, FARRAH, Palm Springs and LA Leather Pride festivals, and more. He made his SF Dore Alley debut last year and this fall will be spinning at Folsom.

Foxylectro, AKA Foxy, is an adorably shy little ginger cub who spins at some of LA’s clubs including The Eagle, Gym Sportsbar, and Precinct. When he is not working as a DJ, Foxy is a classical pianist. He loves vocal house, hip hop and top 40, but also knows how to have a good time with throwbacks. Foxy loves a room full of people dancing, drinks vodka cranberry, and is excited to blow up the Big Wet Spot and Bubba-licious pool parties with his spinning talent.

Babette has had a very successful career over the years, but had to endure some of life’s trials and tribulations before hitting it big on the drag scene. After some questionable work choices, she finally made a connection at a Hollywood party with, of all people, a television sitcom star, in the Hollywood Hills home of Jim J. Bullock. Babette settled in America’s Finest City to attend San Diego State and never left. Babette performs regularly at Street Scene and emcees the annual amateur drag beauty pageant Tantrums and Tiaras, and she’s sure to make this year’s bitchy bingo brunch more outrageous than ever before.   Make sure to buy your bingo cards B-4 they sell out! 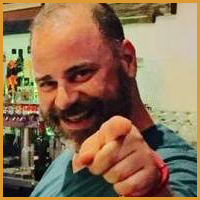 FIL TRI-vee-uh.  Back again by popular demand, he’s actually crazy enough to return to Big Bear ROMP with MORE trivia. When Phil isn’t harassing old ladies or chasing woodland creatures, he spends his free time sunbathing in the nude with cleverly-placed bathtub decals, and occasionally taunting audiences with creative trivia and witty banter.  Join him on Saturday afternoon at the host hotel for an entertaining and hilarious trivia experience you’ll have nightmares about.